The Impact of Film Title Design

Overt yet unseen. Covert yet felt.
Summary
IntroductionConveying genre through lettering & typographyJuxtaposing photo stills with motion and typeUnconventional photography angles and distorted effectsBridging past and present with technologyEnhancing drama with saturated and desaturated tonesThe chronographic contextHigh contrast and loud graphic patterns
Share it on

“I had felt for some time that audience involvement with a film should begin with its first frame.” — Saul Bass, Director, Title Sequence Designer.

When new movies/series are released, most of the praises go to the actors and directors. But there is much more to it and there are a lot more people involved closely in the production of a film. And one such kind is Title Sequence Designers’.

Title sequences combine the art of storytelling and graphic design.

Film titles have been a repository of information about the film they are connected to. This does not only mean mentioning names of people who have worked in the film, but also how title sequences would set the tone of the film from the get go. It’s basically like a prologue to the film. Title sequences are a way of conditioning the audience to be in a specific emotional state before the actual film begins.

The Design of Title Sequences

Title sequence designs have taken different shapes and mediums over the years. In the silent black and white classic films era, title cards in between frames gave context to the audience, like adding dialogues to silent conversations, labelling important plot points so that the audience were always hand in hand with the story of the film.

These designs were deliberately inspired by print designs to have a sense of familiarity. Lettering, typography and border designs in these title cards played a dominant role in branding the film and setting its genre.

For example, romantic films would be garnished with flowery ribbons, crime dramas would have grungy textures along with masculine typography.

These title designs have a core design language of its own.

1. Conveying genre through lettering and typography:

Typesetters were important during the silent film era. Due to the absence of sound, these typography artists had a prominent job in setting up the tone of the film. These were mainly hand illustrated and then photographed and put in between frames of the film as prologues or as dialogues. Inspired by the characters and the genre of the film, these title sequences were designed to immerse the audience and make them feel a certain way.

For instance, the title card of King Kong, one of the most iconic films of all time, had a bold, enormous and shadowed typography which is filled throughout the length of the screen. It immediately made people expect the massiveness of the character. Whereas some titles were inspired by Shakespearean times with Victorian flourishes and calligraphic fonts to appeal to a more dramatic audience.

The audience became more engaged with the film when there was a photograph/video playing in the background of it rather than just reading through text. Titles and credits were put in front of it in a montage-like technique. What’s interesting is that these sequences aren’t necessarily logical but rather capture a poetic and emotional journey between characters.

Films like Blue Valentine visualized an abstract concept of having actual stills from the film and blending it with moving videos. Blue Valentine’s Title designer Jim Helton said that he couldn’t picture these sets of photographs anywhere but inside fireworks — like memories attached to a certain moment. It gives a sense that all the emotions that the characters and the audience will experience are like a flicker in time — fading in and out of the scene just like fireworks. However retaining the warmth of intimacy.

Se7en by David Fincher is considered as one of the most admired films which set a landmark for modern title designs. Its grungy textures and glitchy effect along with its distressing sketchy font sets a stamping impression for the audience that lasts even after the film gets over. This title sequence certainly evokes a lot of questions and expectations for its audience and the film justifies it following the sequence in all glory. The typography was etched into black surface scratch boards and then smeared to acquire a feel of discomfort and misery according to the interview with the creators of Se7en’s title sequence.

4. Bridging past and present with technology

Although title sequences have to send across a certain message, these are a work of art in themselves, challenging the industry to dwell into a world of techniques and conceptual depth that is experimental.

One such film was Catch Me If You Can by Steven Spielberg. Blocking the screen with a cat and mouse chase sequence in the very beginning of the film along with jazz music and flowing typography got the audience hooked to the film’s amusing world set in the 60’s. Title designers realized they didn’t want to use high technology for the entire sequence so they created character stamps and composited on computerized scenes in the background to bring about the hand crafted authenticity of the story of the protagonist who is a trickster. The 60’s inspired retro color palette and Helvetica font dripping over the title sequence is distinct and definitely deserves a special mention.

With the advent and popularity of OTT platforms, there has been a tremendous acknowledgment of title sequences in films, TV/Web series and more so in Video Games. One of the most recent and insanely popular title sequences in the Indian Entertainment industry is Scam 1992: The Harshad Mehta story. It became an unskippable part of the story. People have jammed over the title sequence because of its visuals and of course the music. The entire sequence is fully animated in 3D and rendered to make it look like it’s straight out of a graphic novel. The balanced textured style and lower fps (frames per second) rate employed gives a feel of stop motion where characters and objects are seemed to be sculpted and filmed.

Another series of title sequences from Marvel’s Wanda Vision paid homage to different eras the characters lived throughout the series. Each episode has a different opening credit sequence showing the distinction of time the story is taking place in with its style, tone and typography depicting respective decades it goes through. This is one of the first shows to implement separate title sequences for each episode.

Adapted from a graphic novel, Scott Pilgrim vs The World by Edgar Wright has one of the most arresting title sequences of all time. It makes use of various abstract graphic patterns with an almost brutalist technique when introducing each character. (Fun Fact: The patterns subtly shows the traits of each character). It’s a bold, bright, tacky, spirited, reckless and a sassy take on title sequences. It’s almost hypnotic to see it appearing on the screen out of nowhere, screaming at your face and immediately encouraging the audience to fasten their seatbelts because the ride after the title sequence is going to be pretty unusual.

The level of detail that goes into making them is inspiring and sometimes deeply personal to the collaborators. In the digital age, people have a constant need for entertainment because they fear the experience of boredom. That is why these days, the most common approach for modern blockbuster films/series is to have a minimal approach to the opening sequence and have an elaborated animated title sequence at the end. Nevertheless, good title sequences hook you as an audience, to celebrate the amount of effort the cast and crew has worked on to make a piece of film possible.

The next time you are watching a film/series/Video game, sit back, don’t skip and enjoy the title sequences with a box full of butter popcorn.

We would love to hear your comments on which film/series/video game title sequences you admire the most. Let us know = )

Have a project in mind? Let’s get to work

Announcing our journey to become Carbon neutral by the end of 2022.

What does this mean for you?
Looking to go CO2 neutral? Let’s connect. 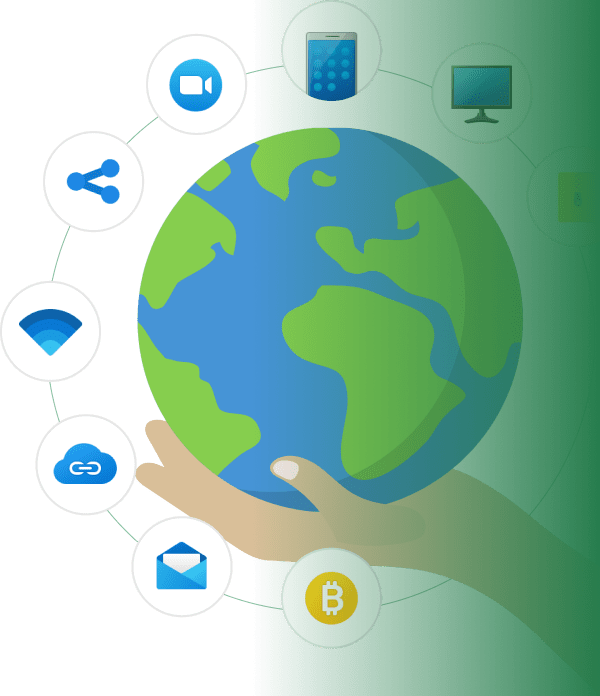